Dominic McGonigal’s work has been described as “confident writing for instruments and voices, great textures and a perfect sense of spacing and pacing.”

He found his voice as a composer with the Missa Et Incarnatus Est, a large work for 8-part choir, soloists and instrumental ensemble. This led to a commission from Pat Halling to write a string quartet for the Quartet Pro Musica which has since been recorded. Vocal group Fever Pitch commissioned him to write a new piece for their Christmas repertoire, which resulted in In The Beginning, premiered at a major charity event in St Paul’s Church, Covent Garden and later performed in Southwark Cathedral.

Recent commissions include a setting of the song La Fleur des Eaux by Maurice Bouchor (also set by Chausson) and a second string quartet, Mathilde, for the Quartet Pro Musica. A new ensemble of six sopranos, Philomel, commissioned him to write Night Song for their inaugural concert in November 2017. So began an artistic collaboration with poet Euan Tait and a second commission for Philomel, Rhythm Herd, premiered by Philomel, in November 2017. His Ave Maria à 10 was selected for a workshop by the BBC Singers with Judith Weir. Future projects include an opera, Burnt Image. 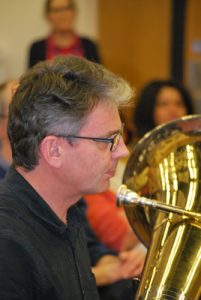 After training as a chorister, Dominic McGonigal read music at King’s College, Cambridge where he sang bass in King’s Chapel Choir including the Festival of Nine Lessons and Carols broadcast to several hundred million people around the world. He then combined a career in the music business with performing and conducting, including appointments as musical director of W11 Opera, COMA Voices, Stoneleigh Choral Society, the Church of St Anselm & St Cecilia in Holborn and Opera Spezzata.

Besides composing, Dominic McGonigal is also currently conducting, singing and playing the tuba. As well as dep freelance engagements, he has conducted EJMS Big Band, Spode Music Week and been interim Director of Music at Holy Redeemer, Chelsea. His conducting has prompted comments such as “…amazed by the conducting…a wonderful way with singers…”